I work as part of artist collective Sociable NonScience, as part of our practice we write love or hate letters to artists, exhibitions etc. that we have visited. As part of my personal art practice I work with smell and the senses a lot, which is why I was interested in your exhibition and am writing you this letter.

Is this a love or a hate letter? I don’t know yet. It’s not a hate letter but there are some things niggling at me. I think the root of them might be that on one hand this is an exhibition that brings together ten perfumes and looks at scent in the way a museum might, but on the other hand each perfume is presented in its own room like an art installation and this made me feel conflicted about how to read it.

You started with a room of historically significant perfumes displayed under bell jars the way that perfume gets displayed in fancy department stores. For me, this gave a nod to perfumes’ place as a highly commercial product to be consumed. It was good to get an overall sense of the history of perfumery. You had made it so that we could smell one or two of these perfumes. Part of me would like to have been able to smell them all, but maybe that would have been overwhelming, the way I find it to be in department stores. Is that why you decided to limit it?

Next – was the beginning of the series of rooms in which each perfume in the exhibition was presented individually and I wasn’t really sure what I was meant to do at that point. It isn’t a given that you can pick up or touch anything in an exhibition and so I needed some form of pointer to tell me that I could. The invigilators* didn’t feel any need to enlighten me, except one of them when I was almost half way through, who explained that it was your intention that we could sit/lie in some of the spaces and in some cases pick up the scented parts of the installation. He also explained that I could use the numbered card you had provided to note down my response to each perfume and in one case, paint it. It was interesting to realize that a lot of these cards, that people had filled in, didn’t describe peoples’ impressions of the perfumes, only labeled what they thought they smelled, which is a nice way to illustrate the lack of language we have to describe smell. I liked that you displayed them as part of the show.

You clearly put a lot of thought into how each room and according perfume was installed. I wonder how much of this came from the perfumers and how much from you, the curators? I really appreciated the effort you had gone to, to tell the story of each perfume but at the same time I found it a bit too illustrative, maybe this is because I was judging it as an art exhibition and not a museum exhibition? For me smell’s ambiguity is one of its strengths. It felt contradictory to have an exhibition about avant guard perfumes that relied heavily on visual set-ups. So I’m wondering if all your visual clues were just too much for me? If they would have worked better if they had been subtle hints that allowed more room for my brain to stretch and wander a little further?

I feel like this is a harsh criticism because there were elements of some of the set-ups that I loved, for instance; the wooden benches with the tree bark still attached, it was lovely to sit on them and rub my fingertips on the bark. The different vessels you had to contain the scents in each room were also really nice, well thought out and designed. In some cases I think these alone would have been enough of a nod to what each scent was about. They very succinctly allowed me to have a personal subjective experience between the tactility of the object and the smell it emitted. 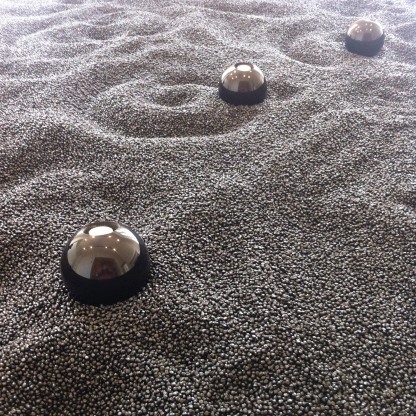 I did like that you had the voice of each perfumer talking about the perfume in the respective rooms, except that the sound carried between the space making it hard to focus on just one voice at a time. Again, I thought maybe you’d done this on purpose as after all, who gets to use only one sense at a time or smell only one thing at a time in daily life? But, trying to concentrate on what I could smell whilst having layers of sound to deal with and then the elaborate set-ups of the rooms just made it harder to concentrate on the scents. It would have been okay if it was a sound installation but in this instance it became too distracting for me.

Maybe it’s not you, maybe it’s me. Maybe I just wasn’t in the right frame of mind on the day I visited to settle enough to appreciate what you had done. You did get me thinking again about how and why I use smell in my own work and all the issues around that. So thanks and sorry for not being able to say I loved it, even though there were lots of things I loved about it,

* This is just F.Y.I. but I need to mention your invigilators (except the aforementioned helpful one.) They seemed to be on a mission to disrupt all your efforts to create a different ambience in each space. I got to listen to them have discussions about whose break was when and who would cover which room, twice. They also had personal conversations across the gallery and marched about from space to space disrupting the flow of the gallery space and squeezing in between the walls you had built to create the rooms within the space. They also had the windows open because it was a warm day, which let in a lot of noise from outside. This was a shame because it undid all the work you had done and made it hard to be in the space and contemplate what for me are some of the really interesting ideas and premises about working with smell; it’s ability to take us directly to another place/time, its invisibility and the lack of language to describe it. Sorry for moaning, but in this instance I was annoyed for you.

This site uses Akismet to reduce spam. Learn how your comment data is processed.